There was a house at the end of our street behind tall willow trees.
As a child I used to walk by that house every day on my way to school.
All I could ever see was an old lady dressed in black clothes,
cooking in her kitchen. Once I asked my mother “Are there witches?”.
“ No!” she said. “Now go get your father, our dinner is ready”.
At that time I was convinced that the old lady was a witch,
teaching magic to the young girl who was always standing besides her.
Why else was my mother so reluctant to talk about them?

After a long time I tried again: “Who lives at the house with the tall
willow trees?” “Victoria. Now don’t you have any homework to do?”,
was the reply I got that time. By then Victoria was a beautiful young lady
with long blond hair like her mother. All those years I had never seen her
outside of her kitchen. At times I thought that she must have had some kind
of strange disease. Why else was she never outside?

When I moved away from hometown I was still wondering about Victoria.
By that time I had convinced myself that Victoria must have been crazy.
She must have fallen in love with someone who betrayed her and lost her mind.
Her mother must have told her that she would not let her see anyone again.
Why else was she never outside all these years?

The last few times I walked by that house the kitchen was empty.
Victoria and her mother must have died.
Why else was nobody at the kitchen window?

ps/ The young girl was born out of wedlock. Her mother had tuberculosis
but she could not afford proper care at a hospital. She became her only caregiver.
When her mother died she moved to another town and was living with her aunt. 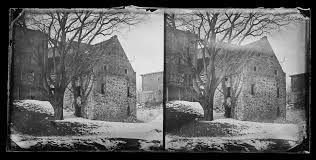